Natural Disaster Severity and the Impact on Customer Satisfaction

The severity of natural disasters reached a record $306B in 2017, with the average CAT event rising to $19.1B. Due to this increase, cycle times (the claim life cycle) have been severely affected across the industry, placing a strain on customer satisfaction levels.

The severity of natural disasters reached a record $306B in 2017, with the average CAT event rising to $19.1B. Due to this increase, cycle times (the claim life cycle) have been severely affected across the industry, placing a strain on customer satisfaction levels. However, not all carriers have been equally affected. Carriers that have been the most proactive in communicating and managing customer expectations have been able to mitigate the risk of lower satisfaction triggered by these CAT events. 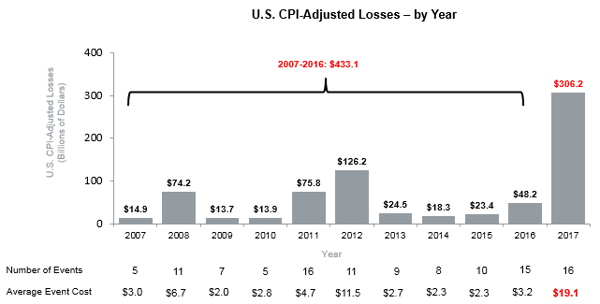 During the past two years, there were six storms that each had a CPI-Adjusted estimated loss of $10B or more. This is 40% of the total number of $10B+ loss events that have occurred since 2007. Four of these large-loss natural disasters occurred in 2017, adding an extra burden to the already escalated number of events that occurred in recent years. Hurricane Ike (2008), Hurricane Irene (2011), the U.S. drought (2012), and Hurricane Sandy (2012) were the main drivers of catastrophic event losses prior to 2016. 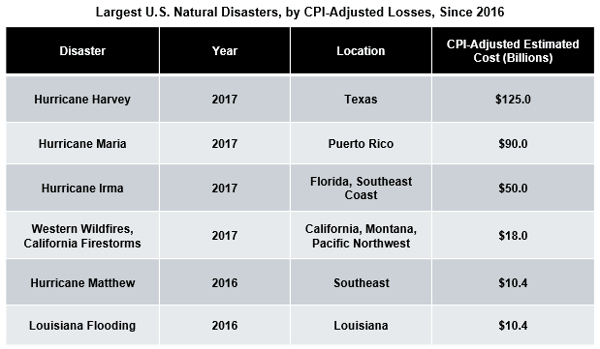 The significant impacts of CATs during the past few years have put a substantial strain on the industry to adequately address these losses. More claims lead to strained resources and ultimately result in slower cycle times during the claims process. The J.D. Power 2018 U.S. Property Claims Satisfaction (PCS) StudySM provides insights as to how property claim cycle times can be affected by catastrophic events.

This study was fielded from January 2017 through November 2017. Study respondents filed and settled claims between January 2016 and November 2017. Given the study time frame, only a portion of the claims for events occurring in the second half of 2017 (such as Hurricane Harvey in August and Hurricane Irma in September) are represented in the 2018 study, with more data available for 2016 events than for 2017 events. Two examples of natural disasters highlighted in the 2018 study include Hurricane Matthew (October 2016) and hail storms that affected the Texas region (April 2016). In analyzing these two examples, it is easy to see how natural disasters can have an impact on both cycle time and customer satisfaction.

During a natural disaster, when insurers’ resources are stretched thin, it is important to be aware of delays in the claim process that can have a negative impact on the cycle time. The claim cycle times in both Texas (hail-related) and Florida (wind/storms-related) were much higher than for non-weather-related claims in the same regions. Estimation times nearly doubled in both natural disaster scenarios compared to claims for non-weather-related events. A delay in the estimation process causes delays in other important processes, including the settlement decision and payment.

How can insurers mitigate the risk surrounding cycle time increases? The 2018 PCS Study findings show that although longer cycle times can lead to lower customer satisfaction, managing claimant-perceived expectations of the claim length can help improve satisfaction scores, even when the cycle time is longer. An analysis of ratings for the Key Performance Indicator (KPI) to provide initial/only payment within 10 days shows that customer satisfaction is much higher when those expectations are managed properly. For example, if the initial/only payment occurs between 11-17 days, and this timing missed the claimant’s expectations of 10 days or less, satisfaction with the time to settle the claim drops 1.72 points (on a 10-point scale) compared to the same time frame when such expectations are met (7.42 vs 9.14, respectively).

It is important for insurers to have a plan in place to minimize cycle time when there is a natural disaster. It is even more important for them to effectively manage the messaging and communication of realistic time lines to appropriately set claimant expectations regarding timing of key claim process events, which can lead to attaining and maintaining high customer satisfaction.